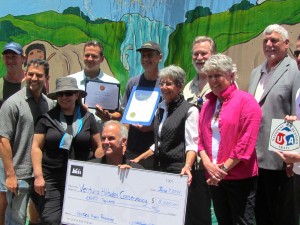 National Trails Day was a great day for the Friends of the Ventura River and our efforts to restore the Ventura River and reconnect people to the river. The Ventura Hillsides Conservancy (VHC) did a fabulous job hosting the event.  (Lee Sherman and Derek Poultney were recognized for all of the amazing the work they do.)

The Ventura River Parkway Trail combines the Ventura River Trail with the Ojai Valley Trail giving bikers and hikers a great 16.5-mile trail connecting the estuary in Ventura to the Los Padres National Forest above Ojai.

Patrick Johnston from the National Parks Service (our hero from the recent Friends of the Ventura River NPS -Rivers and Trails Conservation Assistance grant and mastermind behind our fabulous foldout Ventura River Parkway Trail Guide –Thank you Patrick!) read a letter from his boss, US Interior Secretary Sally Jewell officially designating the trail as a National Recreation Trail.

“This is a really big deal” as Paul Jenkin states in the Anne Kallas article link below.  “We are now one of only about 1200 trails in the United States that are put on a list of designated travel spots. We’re really trying to shine a spotlight on the importance of this river and watershed. It is our water supply and our life blood.”

Over a hundred people attended the celebration event at VHC’s Big Rock Preserve including members of Girl Scout Troop 60718 who helped tidy up the area before the dedication event.  Their presence reminded all of the adults in attendance why we need to work so hard to preserve these natural areas and trails for future generations.

It was wonderful that US Congresswoman Julia Brownley, State Senator Hannah-Beth Jackson, State Assembly-member Das Williams, Brian Brennan (from Supervisor Steve Bennett’s office–Steve was out of state), City Council Member Carl Morehouse, Director of County Parks Ron Van Dyke all took the podium to celebrate this achievement and the ongoing grass roots efforts that will help restore the Ventura River for the generations to come. (Among other things Carl mentioned the Westside Council efforts to reconnect to the river while Ron mentioned recent County/Ojai Valley Land Conservancy accomplishments eliminating a fish passage barrier in the Ventura River.)

It was delightful that as we all gathered to celebrate the Ventura River Parkway Trail being recognized as a National Recreation Trail that bikers and hikers actually enjoying the trail continued to pass through sometimes at just the perfect moment in a speech making me want to shout out “Cue the bikers!” as if it had all been orchestrated and planned. And maybe it was.  As Das Williams, delayed at a previous engagement jogs down the path just a VHC President David Comden is calling him to the podium by saying something clever to the effect of, “And now, the only speaker today who actually had to break sweat to get here…”

At one point in her talk Hannah-Beth stated that “it takes a village” to move projects like these along. And I would like to note that without help from these elected officials and public servants at critical junctures along the way, it would be difficult for the Friends of Ventura River coalition to have accomplished so much in such a relatively short time.  I say relatively short, but that might not be correct. In talking with Mark Capelli, the original “Friend of the Ventura River” (We couldn’t afford the “s” he quipped.) and listening to he and Kathy Bremer (who had worked at Patagonia when “Friends” first began and is now a City Parks and Recreation commissioner) reminisce about events 30 years ago, it hammered home to me that it indeed has been a long haul.

The quote by Margaret Mead springs to mind: “Never doubt that a small group of thoughtful, committed citizens can change the world. Indeed, it is the only thing that ever has.”  And, yet again, now with such a large FoVR coalition pitching in together to get the job(s) done I also think of the old adage “Many hands makes light work.”

During the dedication event REI awarded a generous $8000 grant to VHC to continue their river restoration work and Patrick Johnston brought and VHC installed the first National Recreation Trail logo marker to a sign marking the Big Rock Preserve. (Patrick also brought plaques for the City of Ventura and the County of Ventura the co-applicants in getting the Parkway Trail officially recognized as a National Recreational Trail.)

Also recognized during the ceremony were VHC, Mark Capelli (our original “Friend”) and the Friends of the Ventura River.  I had the honor of accepting the certificate for FoVR for all of the Friends who were there and those of you who were with us in spirit.  The June 7, 2014 Certificate of Recognition from the State of California Senate reads:

“Presented to the Friends of the Ventura River in recognition of your dedication and commitment to our community, and protecting our valuable natural resources; and upon receiving A National Recreational Trail Designation for the Ventura River Parkway.” Signed by Senator Hannah-Beth Jackson.

So, it was, as Julia Brownley so aptly pointed out, “like every day in Ventura County, its a perfect day…” and everyone celebrated the NRT recognition and left with lifted spirits and incentive to expand and re-double our efforts to restore and enhance the Ventura River and its parkway trail.  The NRT recognition will help all of our FoVR groups in their efforts on behalf of the river, its ecosystems and the parkway.

Thanks everyone for staying involved!

To read Anne Kallas’ great article in Sunday’s VC Star “On the path to restoring river” covering the NRT event: