Ventura River Adjudication – Remembering the Past

The City of Ventura was incorporated in 1886, but it claim to the waters of the Ventura River extend back to the establishment of Mission San Buenaventura in 1782.  In addition to the Missions, the Spanish and Mexican governments also established a series of Pueblos and Ranchos between 1769 and 1835 in what later became the state of California. Despite its not being a successor to one of the eight original Spanish or Mexican Pueblos, the City has periodically asserted its claim to the waters of the Ventura River based on a Pueblo water right.

In 1976 the City of Ventura attempted to assert a Pueblo water right against the Casitas Municipal Water District.  The appropriative water rights granted to Casitas in the 1950’s required them to bypass the first 20 cubic feet per second of flow at the Robles Diversion to protect downstream water rights.  The City claimed, however, that this provision did not fully protect its Pueblo water rights. 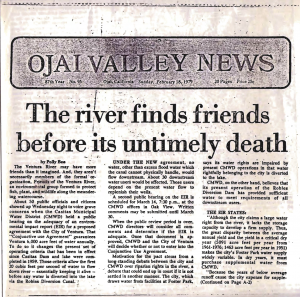 To resolve this dispute, without formally asserting and establishing the City’s Pueblo water right, the City and Casitas proposed to enter into a Conjunctive Use Agreement. This agreement would have allowed Casitas to divert all of the low flow of the Ventura River at its Robles Diversion (up to 500 cubic feet per second) to Lake Casitas.  In exchange Casitas would guarantee the City up to 6,000 acre-feet of water annually from Lake Casitas.

In 1978, the Friends of the Ventura River filed a lawsuit challenging the Environmental Impact Report’s conclusion that the Conjunctive Use Agreement would not adversely affect the Ventura River.  In 1984, after losing in the lower courts, the California Supreme Court rejected the City’s appeal, effectively terminating the Conjunctive Use Agreement.

In 1997, the National Marine Fisheries Service (NMFS) listed steelhead trout in southern California as an endangered species. Rather than comply with new regulatory requirements, the City decided to forego surface diversion and instead rely on its wells at Foster Park.

In 1998, the State of California formally recognized that the Ventura River was impaired by excessive pumping and diversions pursuant to the federal Clean Water Act.

In 2003 NMFS sent a letter notifying the City that the continued operation of the Foster Park wells posed a serious threat to steelhead. In 2007 NMFS issued a “draft jeopardy biological opinion” that specified a minimum flow to protect steelhead at Foster Park.  In response, the City chose to postpone repairs and enlargement of its well field, and recommenced the operation of its other existing wells in the Foster Park area.

In 2013, the City’s hydrology consultants concluded that their pumping was detrimental to critical habitat for endangered steelhead in the Ventura River. The City continued to pump unabated, and from 2014 to 2016 the Ventura River was pumped completely dry at Foster Park for a significant portion of the year.

In 2014, after many years of monitoring water quality in the Ventura River under a program certified by the State, Santa Barbara Channelkeeper filed a lawsuit asking the State to compel the City to reduce its pumping at Foster Park consistent with NMFS requirements. The City responded by petitioning to have the lawsuit dismissed and also simultaneously filed cross-complaints against all other water right holders in the watershed.  The Court rejected the City’s petition.

In 2018, the Appellate Court allowed the City’s cross-complaint against all water right holders to proceed. In 2019, the City signed an interim agreement with Santa Barbara Channelkeeper, based on the NMFS 2007 jeopardy biological opinion, and entered into a court-sponsored settlement agreement process with major water purveyors and several major agricultural landowners.

In January 2020, the City of Ventura commenced adjudication by serving legal summons to over 10,000 individual water rights holders in the Ventura River watershed.

(Note: Adjudication is just a fancy word for suing everybody in the basin, and to resolve groundwater rights, you have to bring in all the users.)

Ventura Assistant City Manager, Akbar Alikhan, responding to questions about the Ventura River adjudication, claimed, “…this is not a water grab. We are trying to find a solution that balances the needs of the local habitat while still providing the valuable water to our local residences.”

Given the City’s long history of claiming unlimited, and unrestricted rights to the waters of the Ventura River, is it reasonable to ask what that balance will be?

Residents who use the watershed, whether as water supply or outdoor recreation, have a stake in the outcome of this latest chapter in the long history of exploitation of the Ventura River.

See posted references at the bottom of the article by following this link: