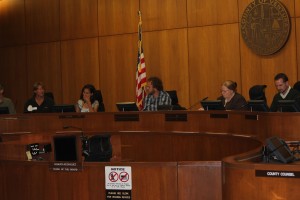 The formal Ventura River Parkway Roll-out Presentation Event was held on July 18, 2012 at the Hall of Administration County Board of Supervisors Chambers.

Supervisor Steve Bennett graciously hosted the presentations by Riti Dhesi of the Trust for Public Land,  Sam Jenniches of the California Coastal Conservancy, and Susan Mulley, a professor in the Department of Landscape Architecture 606 Studio at Cal Poly Pomona whose students created the Ventura River Parkway Vision Plan.

The panel discussion after the formal presentation included updates from organizations currently holding land in the river and working actively to restore habitat and provide public access.

Paul Jenkin from Friends of the Ventura River spoke about current opportunities, the broad coalition which comprises the Friends group and the momentum that Friends has achieved in the last year.  He acknowledged that these large projects take years and perhaps decades to bring to fruition, and mentioned Matilija Dam as an example.  The benefits to be gained are worth the time and effort required.

Greg Gamble, Director of the Ojai Valley Land Conservancy (OVLC) outlined OVLC’s progress over the years in restoring river properties the Ojai Meadows Preserve, the Ventura River Preserve and the Ventura River Confluence Preserve.  Greg  emphasized what everyone in the land conservancy movement knows, that land conservancies work with landowners to obtain the best outcomes for all.  Conservancies work only with willing landowners who wish to sell or donate land.

Derek Poultney with the Ventura Hillsides Conservancy (VHC) spoke about the progress that VHC has made in land acquisition in the river area in the last couple years and the work that volunteers have contributed to clearing non-native species from those properties.   The donation to VHC of the Willoughby property between the Main Street and 101 bridges is soon to be complete and volunteers have already begun to work to remove arundo.  A recent article in the VC Star, previously posted on this blog, featured a work day on this property.

Patrick Johnson of the National Park Service Rivers, Trails and Conservation Assistance Program outlined his participation with a Friends of the Ventura River working group to assist in the design of trails and trail heads, signage and gathering areas at the river.

Rich Rozzelle of California State Parks, who was instrumental in reopening McGrath State Beach, briefly outlined State Parks’ role and support for the benefits a parkway would bring to the community in better connectivity to Emma Wood State Beach and enhanced recreational opportunities in our area.

All speakers emphasized the need for perseverance and political will from all parties to make such a large project a success.  Sam Jenniches’s presentation gave attendees inspiration with his ‘before and after’ images of rivers that had been restored after prior damaging uses and abandonment.

We have many years of work ahead, but have made incredible progress in the last few years which gives us impetus to move the Ventura River Parkway effort forward.